Posted on September 18, 2015 by bookvolunteer

The last name on the gravestone is that of Jessie Amina Press who was born in the East-end ward of St George in the East in 1862 – the same year as her good friend Amelia Berning.

She lived with her parents, James and Temperance and her six brothers and sisters at 17 Richard Street in Stepney. 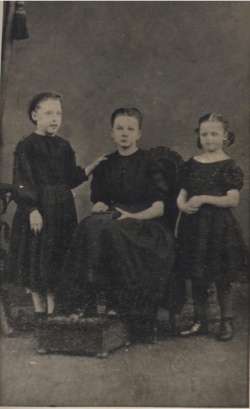 From the left –  Liza, Emily and Jessie Press. Photo courtesy of Vanessa Hamer 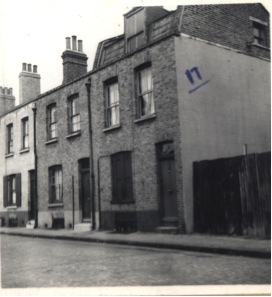 Her father worked as a wood turner, her brothers attended the local school and her older sister was employed as a dress maker but at the age of 18 there is no occupation given on census returns for Jessie.

The records show no occupation for Jessie even in the 1891 census when she would have been 28. Was she in frail health and unable to work? Was she needed at home to look after the family?

In 1892 or 1893 Emily and William (Amelia and Wilhelm) Berning moved into 15 Richard Street, next door to the Press family who still lived at number 17. This, I presume, was the start of a life-long friendship between the two women.

At some time between then and 1911 Jessie found employment as the housekeeper of a Public House – The Earl Zetland. This pub, at 137 Burdett Road, Mile End was run by Frederick Voller, another German immigrant. Did Jessie’s neighbours (The Anglo-German Bernings) help her get the job?

We don’t know where she was living while she was working at ‘The Earl of Zetland’ but in 1931 Jessie was with Amelia Berning, who had left Richard Street several years previously and had been living alone in Cowley Street since the death of her husband. Jessie and Amelia were still together in Cowley Street in 1938 and we know that they were evacuated to Llwyngwair together in 1940.

She was alive when this photo was taken but we don’t know which of these ladies was Jessie Press. 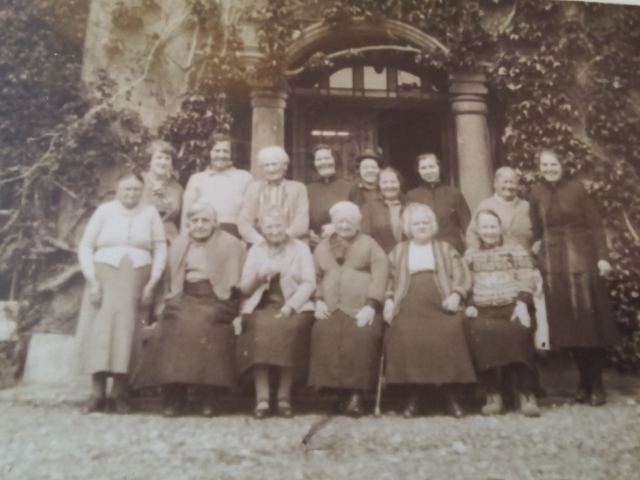 Mary Moulam (seated third from the left in the front row):Emily Berning (standing in the back row, second from the right). Photo courtesy of Jan Ramos.

The last two elderly residents of Llwyngwair died in July 1945. In spite of the order of names on the gravestone, Elizabeth Dorman (age 94) outlived Jessie (age 83) by three weeks.

With many thanks to Jessie Press’s family – Vanessa Hamer, her great grand niece, and April Smith, her cousin 4x removed, for the photos and family history that have helped us tell Jessie’s story.

I'm passionate about books, about Oxfam and about making the world a better place. When I'm not filling the shelves in Oxfam Wilmslow, I might be found reading the books I've bought in the beautiful surroundings of North Pembrokeshire.
View all posts by bookvolunteer →
This entry was posted in History, Religion and tagged Dinas, Dinas Cross, east end, evacuees, Jessie Press, Llwygwair, Nevern, Pembrokeshire, Salvation Army. Bookmark the permalink.