When was the last invasion of Britain? 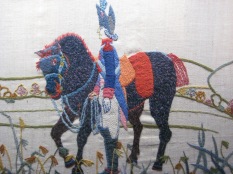 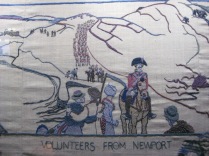 You’ll find the answer in Fishguard Town Hall, along with pictures that bring the remarkable events of February 1798 to life.

The glorious Fishguard Tapestry, designed by Elizabeth Cramp for the bicentennial celebrations and stitched by 70 local people, splendidly tells the story of how the drunken ill-disciplined French invasion force was confronted by local people, while the British troops, fearing themselves outnumbered, withdrew to Haverfordwest.

The weather, along with the ineptitude of the French invasion force, had saved Bristol from attack and brought 1400 troops of the Légion Noire to Pembrokeshire, where they disembarked at Carreg Wastad Point and marched on Fishguard.

Jemima Nicholas, locally accredited with the strategy which deployed  local women in their red costumes to defeat the invaders,  was not a mythological character but did indeed play a heroic role and is portrayed in the tapestry as a powerful figure. She is the cobbler who, armed with a pitchfork, rounded up twelve Frenchmen near Llanwnda and then went back for more. Within a couple of days the French troops had surrendered, but not before news of their arrival had caused some panic and consternation across the country.

The treaty of surrender was signed by the French in the Royal Oak Pub, on Market Square. The tapestry is beautifully displayed upstairs in Fishguard Town Hall, on the other side of the square, where you can view it for free.

I'm passionate about books, about Oxfam and about making the world a better place. When I'm not filling the shelves in Oxfam Wilmslow, I might be found reading the books I've bought in the beautiful surroundings of North Pembrokeshire.
View all posts by bookvolunteer →
This entry was posted in Art, Crafts, History, Sea and tagged Carreg Wastad, Dinas, Dinas Cross, Fishguard, French invasion, Jemima Nicholas, Pembrokeshire, Tegfan. Bookmark the permalink.