Posted on February 14, 2014 by bookvolunteer 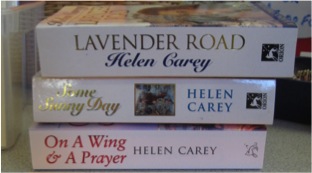 Helen Carey is a very local author whose books have a double connection to our part of West Wales.

Her Lavender Road series is set during the second world war and centres on a (fictional) South London street. My grandfather, along with much of the Dinas diaspora ended up in South London at the beginning of the 20th century and  I grew up near the Lavender Road characters, living for many years alongside them. When you have read the first three novels in the series you can look forward to the fourth – due to be published shortly.

Helen Carey now lives in Newport, just along the coastal path from Tegfan and, unsurprisingly, our part of West Wales also features as a setting for some of her books. In an interview, published a year ago on the Romantic Novelists’ Association blog, the author explained: 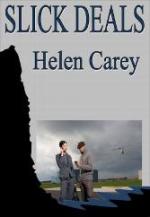 “My latest novel, SLICK DEALS, was originally inspired by a Dolphin Survey boat trip in Cardigan Bay. For some time I have wanted to set a novel in Wales and seeing an oil exploration vessel just off the beautiful Pembrokeshire coast gave me the perfect opportunity to create a romantic, exciting crime adventure. I have always liked stories about ordinary people getting caught up in big dangerous issues. When I first left university I worked as an oil trader for Shell. I now consider myself to be a conservationist.”

As well as the next book in the Lavender Road Series, Helen Carey is promising us a book on the wartime experience of an evacuee from South London to West Wales. If you feel like indulging in some romantic fiction (given today’s date) look out for these engaging reads from our local author. You might be pleasantly surprised.

I'm passionate about books, about Oxfam and about making the world a better place. When I'm not filling the shelves in Oxfam Wilmslow, I might be found reading the books I've bought in the beautiful surroundings of North Pembrokeshire.
View all posts by bookvolunteer →
This entry was posted in books, History and tagged author, Dinas, Dinas Cross, Pembrokeshire, romantic fiction, Tegfan, WW2. Bookmark the permalink.