Spot a chough in Dinas 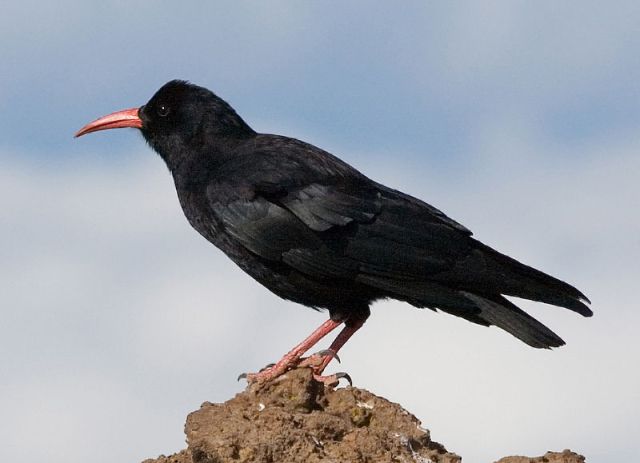 The RSPB estimates that there are only 250 to 350 breeding pairs of choughs in Britain and I’d say that there’s a good chance that you’ll see some during a Tegfan holiday. With their bright red beak and matching legs, they are easily recognised, even from a distance, and memorable. They nest in crevices in the cliff face on Dinas Head and socialise on the rock. However, they feed mainly on invertebrates in the short grass and bare earth of the cliff tops – and that’s where we have seen them – on the seaward side of the path as we descended the slope from the triangulation point towards Pwllgwaelod.  Try not to disturb their foraging!

I'm passionate about books, about Oxfam and about making the world a better place. When I'm not filling the shelves in Oxfam Wilmslow, I might be found reading the books I've bought in the beautiful surroundings of North Pembrokeshire.
View all posts by bookvolunteer →
This entry was posted in Nature, Walking, Wildlife and tagged bird-watching, Birding, chough, coast path, Coastal path, Dinas, Dinas Cross, Dinas Island, Pembrokeshire, Pyrrhocorax pyrrhocorax, Tegfan. Bookmark the permalink.