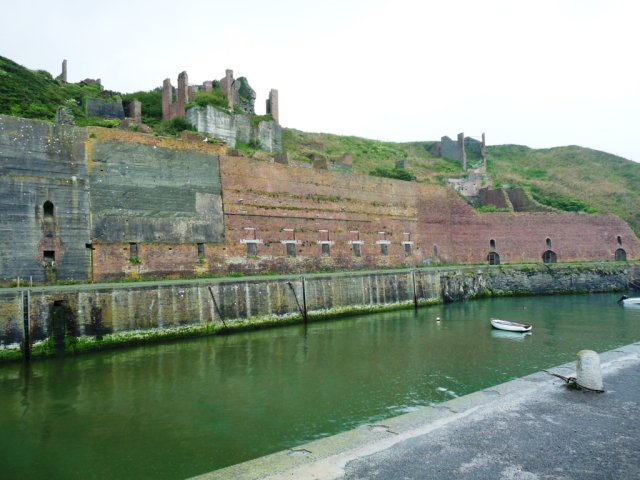 It’s fifteen miles or so from Dinas to Porthgain but it’s worth going just for the ruins. In the early 1900s this was a prosperous harbour, where local slate was processed and shipped. When the slate workings were no longer profitable, the waste from the process was used for brick making and locally quarried dolerite was used for road stone.  But all this came to an end in the early 1930s and local employment is now mainly provided by the small fleet of boats, fishing for crabs and lobsters. The abandoned industrial workings are  now a designated conservation area, but it’s a place to wander through rather than look at from a distance. The old photos in the Sloop Inn will bring the scenes to life.

The industrial area is now being reclaimed by plant and bird life and this four mile walk was Number 1 in the Guardian/National Trust’s series of top 10 UK walks. Both the Blue Lagoon end and Porthgain are dominated by old industrial works and the coastal scenery is wild and dramatic. The return takes you inland and starts by the old railway line that ran from the slate quarry to the port of Porthgain.

I'm passionate about books, about Oxfam and about making the world a better place. When I'm not filling the shelves in Oxfam Wilmslow, I might be found reading the books I've bought in the beautiful surroundings of North Pembrokeshire.
View all posts by bookvolunteer →
This entry was posted in History, Nature, Walking and tagged Dinas, Dinas Cross, Industrial archeology, Porthgain, slate, Sloop Inn. Bookmark the permalink.