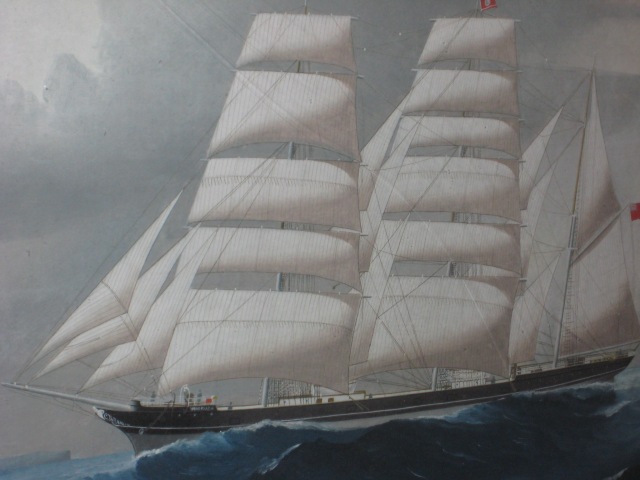 The Windrush, shown here in glorious full sail on choppy seas, was brand new when my father’s Uncle Johnny was apprenticed on board at Bristol docks.  The ship was a three masted barque, built in Sunderland in 1891 and registered there in 1892. Its long distance voyages took it to North and South America as well as Australia until it sank in 1920 after a collision with a Spanish steam ship in the North Atlantic. Five members of the crew were lost.

I don’t know the name of the artist and wasn’t able to examine the painting in detail as it sits in a very heavy frame and is chained to the wall. However, there is a very similar painting in the Pannett Art Gallery in Whitby. That work also lacks information about the artist and appears to be wrongly dated. See here.

I don’t know why our uncle Johnny chose this ship nor if there were other Dinas men aboard but so many of the men from the village went to sea that I expect there was some connection.

Here is the same ship, sadly denuded and looking very fragile, at a wharf in an Australian port. 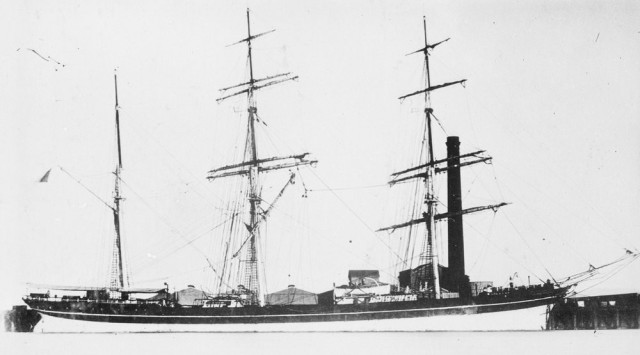 I'm passionate about books, about Oxfam and about making the world a better place. When I'm not filling the shelves in Oxfam Wilmslow, I might be found reading the books I've bought in the beautiful surroundings of North Pembrokeshire.
View all posts by bookvolunteer →
This entry was posted in Art, History, Sea and tagged Dinas, Dinas Cross, Sailing ship, The Windrush. Bookmark the permalink.