Many of Dinas’ young men were employed on tramp steamers – ships that had no fixed schedule or itinerary but were chartered to carry goods as and where needed. David George, from Hescwm, made his final voyage at the age of 25 in November 1892. He was working on the ss Greystoke, a tramp steamer carrying grain from Odessa, a major seaport on the Black Sea, to Hamburg, on the river Elbe in Northern Germany. 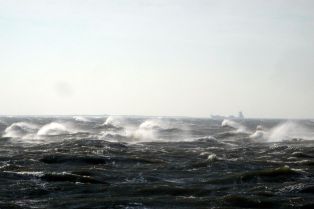 The broken waves indicate the presence of the sandbank

They had nearly come to the end of their voyage when their ship ran aground on the Grosse Vogel sandbank near Cuxhaven. This is one of two treacherous sandbanks at the estuary of the River Elbe where the combination of frequent storms and high seas  with very fine sand that holds any ship that runs aground until is is broken up by the waves have accounted for numerous shipwrecks.

In recognition of the dangers, Cuxhaven now has a large coastguard and life boat station but you can still see the wreck of the Ondo from 1961.

When the SS Greystoke ran aground the crew abandoned ship and took to the life boats. The tragedy was reported by the Hamburg correspondent of ‘The Times’.

David George died of exposure in an open boat and was buried in the ‘Welt’ Cemetery in Schleswig-Holstein but his sad early death is also remembered in Dinas’ Machpelah graveyard. 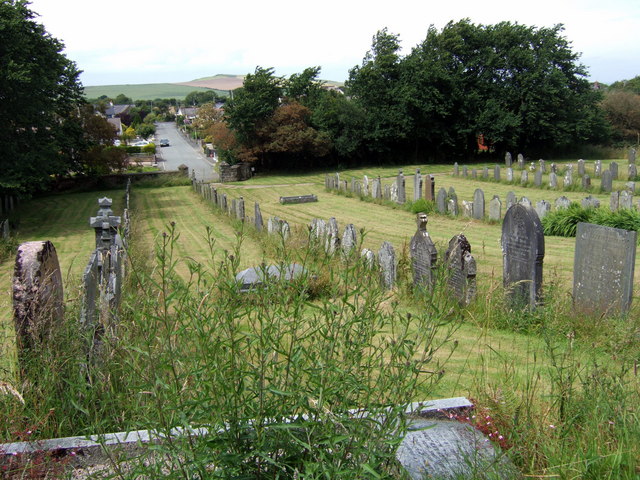 Machpelah cemetery
The cemetery here, which is associated with Capel Tabor, was opened in 1834 and enlarged in 1906. Set on hillside above the village, it has a view across to Dinas Island and the sea to the north, very appropriate to the number of mariners buried here. © Copyright ceridwen

I'm passionate about books, about Oxfam and about making the world a better place. When I'm not filling the shelves in Oxfam Wilmslow, I might be found reading the books I've bought in the beautiful surroundings of North Pembrokeshire.
View all posts by bookvolunteer →
This entry was posted in History, Sea and tagged David George, Dinas, Dinas Cross, SS Greystoke. Bookmark the permalink.