Teachers in the family 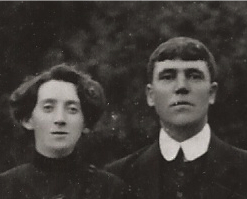 The first was Paulina George who was employed as a pupil-teacher at Dinas County School. By 1903, aged 19 she had been promoted to ‘assistant’ and earned £35 per annum. She made a significant contribution to the school by introducing Welsh-medium education to the Infants. This was one of many improvements to education in Dinas under the direction of the new Head Teacher – Tom Maurice – whom she married.

Next came Mary Anne Harries who married Paulina’s brother, Evan George, my grandfather. Although her family originally came from Dinas, they had settled in Swansea and here she is (at the front, on the left) at school, or maybe at college.

And here she is again. This time she’s working as a teacher in Swansea and has a class of her own. Are the girls surly, unhappy or just from an era before we learnt to smile for the camera?

The couple moved to South London where their eldest daughter, Eva(ngeline), also became a teacher, training at Avery Hill College in the 1920s. This photo, taken in 1926 on the roof of Roper Hall, shows my aunt Eva dressed as a blackbird. Is this a sign that education was becoming more fun?

Teacher training at Avery Hill, a new college for women, was thorough and progressive, although it didn’t include science in the curriculum until the 1930s as so few of the trainee teachers had studied it themselves at school. There was teaching practice, however, and here is Eva with class standard IV on ‘Senior School practice’ at Union Street School Woolwich.

When she qualified, she went to teach at Chaucer Primary School in the 1930s,

She loved her work and in spite of class sizes that were often 50+ prided herself that all the children had learnt to read before they went up to the Junior School.

I'm passionate about books, about Oxfam and about making the world a better place. When I'm not filling the shelves in Oxfam Wilmslow, I might be found reading the books I've bought in the beautiful surroundings of North Pembrokeshire.
View all posts by bookvolunteer →
This entry was posted in History, Welsh language and tagged Avery Hill Teacher Training College, Chaucer Primary School, Dinas, Dinas County School, Dinas Cross, English Martyrs Primary School, Roper Hall, Union Street School. Bookmark the permalink.

2 Responses to Teachers in the family