Posted on September 16, 2015 by bookvolunteer 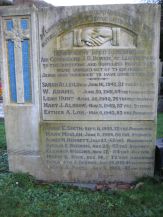 Mary Moulan, the seventh name on this headstone in the graveyard at Nevern, proved difficult to find until we realized that the final ‘n’ of her name, as written on the tombstone, should be an ‘m’. The search, in the end, however, was gloriously successful in helping us document the lives of our dear evacuees. To our astonishment and delight, her family sent us two group photos. Although we can’t match many names to faces, the photos have helped bring the elderly ladies listed on the tombstone to life.

Mary Moulan, of Stepney, turned out to be Mary Ann Rochford, whose family originally came from Ireland and who married John Moulam in Shoreditch in 1877. The couple went on to have five children but John (a police constable) died in his thirties, leaving Mary with her youngest child still to be baptized and the necessity of putting her oldest child into the Police Orphanage to ease the burden of caring for the others. 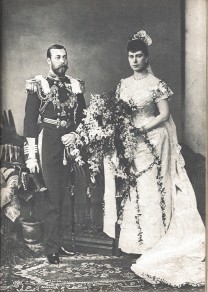 Mary Moulam was a talented seamstress. She must have been working after the death of her husband because her family knows that she helped make the dress for Queen Mary’s wedding in 1893. The design was entrusted to ‘Linton and Curtis’ of Albemarle Street (who may have been Mary’s employers) but the silk cloth was woven by Warner’s of Spitalfields, not far from where Mary was living at the time.

The family also benefited from her skills. She would only have to see a garment once and she’d be able to make a faithful copy from memory. In later years her granddaughters could go and see a film with her, pick out a favourite dress on the screen and know that grandmother would make the same for them; they could be dressed like the stars.

Mary was obviously quite a character. She not only had considerable talents but also had ‘the gift’.  Her family remembers that during the war she used to sit by her window at night reading the cards without closing the blackout curtains even when there was a raid imminent. The air raid warden, whose job it was to check that no chink of light was visible from the street, was often having to reprimand her. Could this have been part of the reason she was deported evacuated to Wales?

Here is Mary, elegantly dressed, coiffed and looking young for her years. 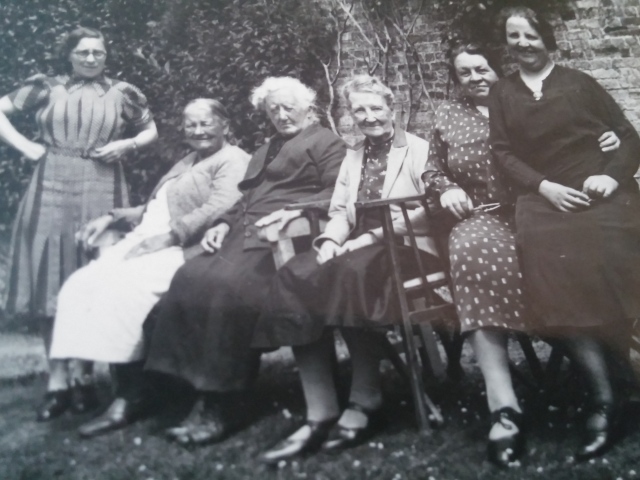 Mary Moulam (third from the right) and friends at Llwyngwair.

With many thanks to Jan Ramos (great grand-daughter of Mary Moulam) for this photo and family memories.

I'm passionate about books, about Oxfam and about making the world a better place. When I'm not filling the shelves in Oxfam Wilmslow, I might be found reading the books I've bought in the beautiful surroundings of North Pembrokeshire.
View all posts by bookvolunteer →
This entry was posted in History, Religion and tagged evacuees, Llwyngwair, Mary Moulam, Second World War. Bookmark the permalink.

2 Responses to Part 4: A Royal Connection