Posted on September 19, 2014 by bookvolunteer 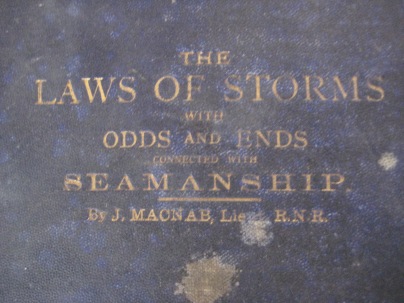 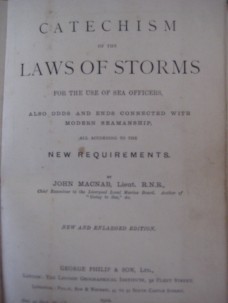 Anyone studying family history in the Dinas area or merely haunting the graveyards to read the tombstones will know that too many mariners died at sea.

Board of Trade inquiries into maritime disasters in the 19th century showed that a ship could be saved if the master knew more about the pattern of storms in the tropics. As a result the syllabus was extended and this little book, published in 1884, was  written as a text-book , covering this new area of the curriculum, for would-be officers studying for their professional competency exams.

Many of the topics covered are technical and very specific but the author is aware that he is covering new ground and is encouraging to young mariners. He includes a number of clear illustrations and vivid descriptions that will convince his students that J. Macnab Lieut. R. N. R. knows what he is talking about. 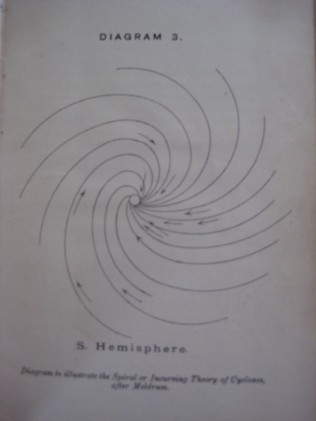 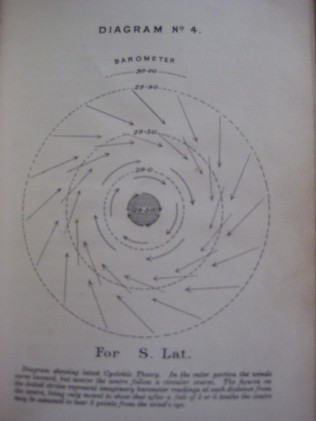 The second half of the book contains possible examination questions and model answers. Like generations of teachers, he first reminds his readers “Never attempt to answer any question without first reading it carefully from end to end“.

Q. 22. — Give the usual indications of the approach of a cyclone in the tropics.

A. — Generally the weather becomes unsettled a day or so previously, and a long rolling sea sets in from where the storm is. Next, the barometer begins to fall (see No. 19) ; the thermometer rises as the atmosphere becomes more sultry, and ultimately the appearance of a dense bank of cloud betokens that the dread visitor is at hand.
As it draws nearer, the wind rapidly freshens, and seems to be tearing great ragged pieces of cloud from the bank. The sea now begins to run higher and cross, the sky presents a wild and terrifying appearance, while the true hurricane wind comes in ever increasing squalls. When fairly involved, the ship will find herself in a dreadful war of the elements, sea and sky literally mingled together, the wind coming in irresistible gusts in rapid succession, with — one might say — a whole gale for broken stowage. In some cyclones there is much lightning, but the thunder is inaudible amid the roar of the storm.

The complete text can be found here: https://archive.org/stream/catechismlawsto00macngoog#page/n6/mode/2up

I'm passionate about books, about Oxfam and about making the world a better place. When I'm not filling the shelves in Oxfam Wilmslow, I might be found reading the books I've bought in the beautiful surroundings of North Pembrokeshire.
View all posts by bookvolunteer →
This entry was posted in History, Sea and tagged catechism of the Laws of Storms, Dinas, Dinas Cross, master mariner, Pembrokeshire, sea captain, ship wrecks. Bookmark the permalink.

1 Response to The Sea Captain’s bookshelf