Posted on February 6, 2015 by bookvolunteer 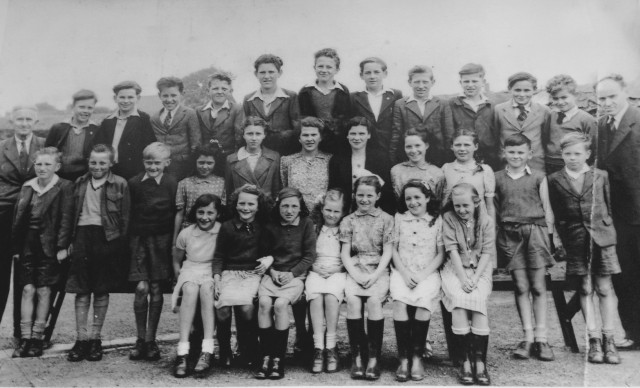 Some of these children look older than you might expect for a primary school photo* but in 1946 only those who passed the 11+ could move on to Fishguard Grammar. The others stayed in Dinas until they could leave school at the age of 14. This photo appears to cover only the top classes in the school; the youngest girls, sitting on the bench at the front, must have been about ten.

The three evacuees in this photo had been part of a much larger group, most of whom had returned home in the summer of 1945. In June 1939 a group of 42 children and three teachers had arrived, as evacuees, at Dinas school where they were taught in the hall until it was decided to relocate the schooling for the older new arrivals to the church hall in Bryn Henllan. In addition, the school accepted many ‘unofficial’ evacuees and the swelling numbers and comings and goings must have made life difficult for the Head teacher who had been newly appointed in June 1939.

In September 1954, the opening of the new school in Fishguard meant that all Dinas’ children could move onto a secondary school at age 11, and Dinas County Primary school became a proper primary school at last.

For more information on Dinas School see ‘The History of Education in Dinas’. This is a fascinating publication that can be obtained (in English or Welsh) from Ann and John Hughes. Phone 01348 811255 for information.

*Apologies for the distortion. The children at either end of the middle row seem to be leaning at such an unlikely angle that they could have been taking instruction from the old conger-eel, who taught ‘Drawling, Stretching and Fainting in Coils’ to the Mock Turtle in ‘Alice in Wonderland’.

I'm passionate about books, about Oxfam and about making the world a better place. When I'm not filling the shelves in Oxfam Wilmslow, I might be found reading the books I've bought in the beautiful surroundings of North Pembrokeshire.
View all posts by bookvolunteer →
This entry was posted in History and tagged Dinas, Dinas County Primary School, Dinas Cross, evacuees, WW2. Bookmark the permalink.